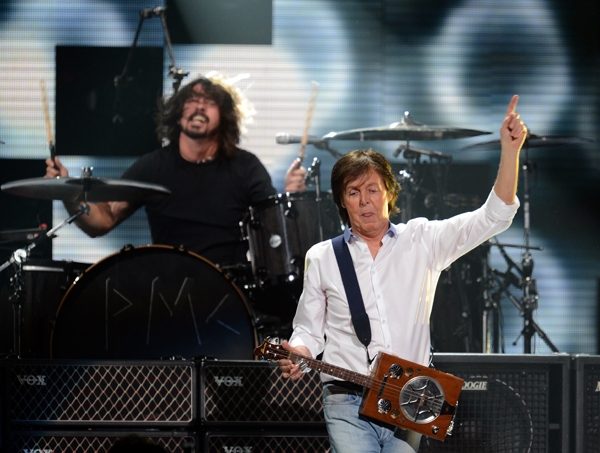 Rock ‘n roll super hero Dave Grohl has been hard at work on a new documentary called Sound City that explores a storied L.A. recording studio of the same name. The project put him in touch with an extensive list of rock stars for interviews in the film, and music for the soundtrack. And one of those connections happens to be not just “a” Beatle, but “the” Beatle Paul McCartney.

The friendship between GRohl and McCartney goes back to 2012 when McCartney joined the surviving members of Nirvana (Grohl, Krist Novoselic and Pat Smear) to play a concert in what was dubbed “Sir-vana.” At the 12-12-12 Concert, “Sir-vana” debuted a new track called “Cut Me Some Slack,” which makes “Helter Skelter” sound about as metal as “Love Me Do.” Fans can look forward to the song’s release on the soundtrack for Sound City called “Reel to Reel.”

Grohl spoke with KROQ’s Kevin & Bean, to discuss the creation of “Cut Me Some Slack.” Grohl and McCartney have a history that goes deeper than that 2012 jam session, citing their 2009 Grammy performance among other things.

Grohl said that the inspiration to ask McCartney to jam came during the filming of the documentary. McCartney came to the studio, “And we just jammed,” recounts Grohl, “and we wrote this song in about an hour and recorded it. We walked in, we jammed it. It came out of nowhere – the best songs happen that way. We recorded it live and put a vocal over it and that was it. It was three hours and it was perfect.”

The draw for Grohl came from the purity of musical expression. He said of the experience: “You have to understand, one of the great things about playing with Paul McCartney or playing with someone like Neil Young is, that generation of musicians, they cherish and respect and value the practice of just going into a room and coming up with something and jamming it and making it a song. There’s not like seven songwriters and seven producers and digital technology or whatever. It’s people getting in a room.”

Sound City promises to be an incredible film for fans of rock music. Offering a behind the scenes glimpse of some of the most important acts in rock history.