Casey Kasem was born in 1932. He is originally of Lebanese descent, born Kemal Amin Kasem. He had aspirations as a child of becoming a professional baseball player, but turned to radio hosting after he joined his high school radio broadcasting club. 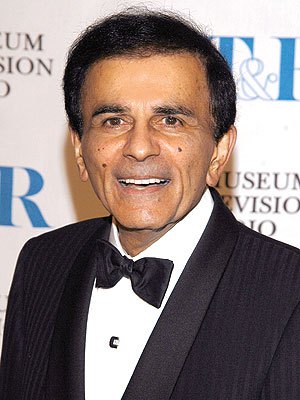 Kasem was drafted into the army at the age of 20, where he was sent to Korea. He continued to hone his broadcasting skills there as part of the Armed Forces Radio Korea Network, where he developed a knack for providing his audience with little factoids about the music he played for them.

Kasem travelled around the USA after his tour with the army ended, putting him in places like San Francisco, Cleveland and Oakland. During this time of his career, Kasem began gaining fame for his “teaser and bio” features. The story goes that he was starved for material before a broadcast one night, so he found a celebrity gossip magazine and began reading some of those stories to his audience before introducing the celebrity and playing their song.

Kasem’s true calling came in 1970, when he launched his new radio show American Top 40. He was able to harness his years of factoids, his on-air personality and his approach to gain national syndication and a wide audience following. He was awarded a star on the Hollywood Walk of Fame in 1981, and he became the youngest inductee into the Radio Hall of Fame in 1992.

Unfortunately, Kasem’s health has been on a gradual decline from Parkinson’s in the recent years. He is currently residing in Washington State, where his daughter Kerri Kasem takes care of him.