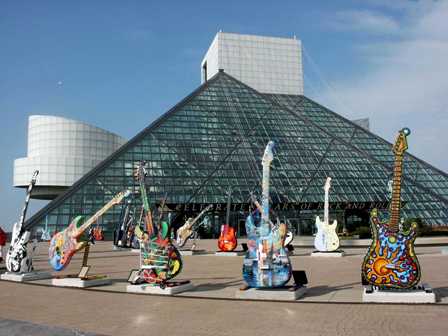 It was 1995 when the Rock and Roll Hall of Fame first opened its doors to the public. Though the foundation started in New York City, the museum itself was based in Lake Erie in downtown Cleveland. The Hall was started as a method to educate fans and scholars on the history of rock and roll music. The original concept involved purchasing a brown stone building in New York City. The Hall would be simultaneously a museum, a library and an archive.

The foundation was leaning towards New York when a few other cities entered bids of their own. Los Angeles, Chicago and Philadelphia were among those who put in their bids, each known for its own musical groups. Prior to the museum, there were inaugural dinners held where the inductees would perform and accept awards. The first was held in 1986, honoring the likes of Fats Domino, the Everly Brothers and Buddy Holly. It was a public poll conducted by USA Today that first pointed towards Cleveland as the ideal site for the Hall of Fame.

Once Cleveland was chosen, an architect had to follow. The foundation chose I.M. Pei as the designer, but he knew nothing about rock and roll. Following extensive research on the topic, including cross country trips to different shows, he submitted his vision. Ground was broken in 1993. Pete Townshend was there, donating the Gibson J-200 guitar he used while he composed the song “Tommy.” Today, the museum collects rock artifacts and fulfills its mission of educating the public on rock music.